I spent some time with this Japanese exclusive tonight, and thought I'd briefly write a little something up about it.

First of all, this isn't a game, but an aquarium simulator and fish edutainment title. You can look at info screens about fish ("Data Fish"); choose different fish for a CGI movie sequence ("Electric Blue"); get fish to, uh, kiss each other ("Options" > Kiss); or populate a tank with the fish of your choosing ("Mermaid").

However, in "Mermaid" mode you can control one of the fish, and this gives it a tiny whiff of something vaguely resembling gameplay. Your fish moves a bit like Ecco the Dolphin, in that one of the buttons makes you dart forward, but you can't turn Ecco-esque flips or send out sonar bursts, alas.

After a while fish food will start dropping into the tank, and if you snag a few pieces, a mermaid will appear (though she looks more like a sea monkey than Ariel). Keep snagging food, and more mermaids of various colors appear. Snag even more, and eventually the screen will fade out and you'll go to a weird sequence where constellations and zodiac signs are displayed alongside images of various fish.

And...that's about it, unless there's something I've missed. It's certainly pretty, with attractive music (though the loop points are occasionally too soon or not quite clean) and graphics that range from very nice to mediocre (you can see a couple screenshots at DP if you're curious). But as the GOAT Store wrote about the Saturn version of this title, "Who thought this would sell well? And who bought this before you?"

BTW, the whole thing is very accessible to non-Japanese speakers. Other than parts of a splash screen or two, and the info screens in "Data Fish", everything is in English. The English-language text in the opening credits fades in and out very quickly, almost as though it's only meant as a kind of passing decoration.

Also, I noticed that the "Electric Blue" fish selection screen seems to extend past the bottom of my TV, which makes your selections impossible to see. I'd expect something like this from a PAL exclusive, but it took me by surprise in a Japanese title. Otherwise it runs fine on my American FZ-1, though I noticed a few white glitches in the walls of the opening FMV tunnel -- do those happen on a Japanese system?

Anyway, unless I'm missing something, this really has no value except as a curiosity, or as light entertainment for fish lovers and very young children (who might like Mermaid mode). So, for 3DO completists only. But at least it's inoffensive, and the soundtrack has a couple moments for fans of liquidy ambient/New Age music.
Top

Thanks for writing up a detailed synopsis on this game. I didn't know it was even remotely in English, so I always avoided it. I will most-likely pick it up now. If anything, it sounds like another quirky Japanese release, always worth playing around with for a few minutes.

Nice review. I haven't played around with this title in ages, but after reading your review I'm kinda curious to check it out again.
Most wanted - Eye of Typhoon, 3DO Magazines issues #14 & #15, Pro Stadium, Defcon 5
Top

I was vaguely poking around to see if I could find somewhere to buy this "game", and found this:

I don't really know what that video is trying to do. Is it some sort of weird Youtube video-making spambot?
Top

goldenband wrote:I was vaguely poking around to see if I could find somewhere to buy this "game", and found this:

I don't really know what that video is trying to do. Is it some sort of weird Youtube video-making spambot?

Hmmm ... I should start making YouTube vids. I always worried I wouldn't be able to make anything of high enough quality, but after seeing this vid I have more confidence. I'm sure I can make a slideshow of 3DO box scans ... I may need to practice zooming in too close and making the video appear fuzzy, but I'm sure I could do it.

Would it be good enough for Implant Games?

I don't know, you'd have to talk to Kris on that one. It's his site, not mine.

Although if you can pick yourself up a half-decent mic, I wouldn't mind having another guest on the podcast. It's nice mixing things up like that every now and then.

Austin wrote:I don't know, you'd have to talk to Kris on that one. It's his site, not mine.

Although if you can pick yourself up a half-decent mic, I wouldn't mind having another guest on the podcast. It's nice mixing things up like that every now and then.

What are some halfway decent ones that don't run expensive? What do you recommend?
Most wanted - Eye of Typhoon, 3DO Magazines issues #14 & #15, Pro Stadium, Defcon 5
Top

Well, something like a Sure SM57 or 58 would work well, although those are $80 to $100 I believe. Then you would need an interface that will take their inputs.

I'd get something cheap to start, like a Rock Band USB mic. Surprisingly, they work halfway decently for this purpose. I believe that's what Kris used for the first few episodes. Just have a pop filter, those will run $15 or $20, but are well worth it.
http://www.youtube.com/c/gameplayandtalk
Top

Now that I'm thinking about it, I may have a mic buried in my misc. electronics box. I gotta look. 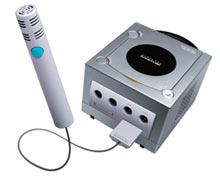 LOL! Yeah, I don't think that will work.