Since I just beat this one, I thought I'd write a short review. 3DOKid reviewed it a while back, while Hardcore Gaming 101 actually featured it as a "kusoge of the week", though I think that's unfairly harsh.

Taiketsu Rumiizu! (対決 るみーず!) is a Japanese exclusive game that, as I said to my wife, is basically like Bomberman with water. According to HG101 the title is sort of a play on words, which I guess could be translated as "Water Battle", "Water Confrontation", or something similar. ("Taiketsu Rooms" is apparently a bogus transliteration, however.) It also came out for PlayStation, but I haven't played that version.

You duke it out against up to three opponents in a maze-like arena, but instead of attacking them with bombs, you open valves to release streams of water that snake through the playfield. If a character is caught by one of these torrents, it's curtains for them, as they'll eventually get sucked into a manhole (or, in certain levels, dragged offscreen). Each valve takes a moment to open and another moment to start flowing; linger too long after opening it, and it'll be you who gets swept away. The last player standing wins the round (though a draw is possible if the last two players are incapacitated or caught by water), and victory in each match is attained by winning a total of three rounds.

The game's five levels feature a typical assortment of power-ups, which are revealed by popping by balloons that litter the stage and activated with the B button. The blue wave powerup increases the length and speed of your stream by up to three levels (and decreases the amount of time it takes to open a valve), while the red wave is a "power-down" that does the opposite. The life preserver is used to escape a stream you've been caught in, but I couldn't always get it to work. Other powerups let you create a new valve or a container of water to tip over, or drop a pile of ice that can freeze a stream (and an opponent) in place, but I didn't find these especially useful.

Environmental hazards are also present, and vary by level. These include whirlpool squares, disappearing and moveable blocks, sticks of dynamite that eventually explode with deadly effect, and spinning arrows whose function wasn't clear to me.

Once the player wins three rounds and the match, you enter a boss fight. (If any other character wins three rounds first, you get a GAME OVER, though you can continue by pressing A.) These use the same mechanic as the main game, but the boss takes three water attacks to kill and is immune to hazards, and in later levels you have to fight two or three bosses at once. Your character is still a one-hit kill proposition, and losing a boss fight sends you back to that level's arena match to earn another three wins.

However, touching the bosses doesn't harm you, and oddly enough they don't really attack very much but instead focus on avoiding your attacks and running out the clock. Consequently, you're more likely to unwittingly commit watery suicide than get hurt by any of the bosses' actions.

The graphics, sound, and controls in Taiketsu Rumiizu! are generally clean, simple, and crisp. I had no objections to any of them, though the game does ignore controller input that precedes the start of a round (so if you try to start moving a split-second before the round starts, you'll have to release the D-pad and press down again). There's pervasive slowdown and/or frame skipping, but it's not really a problem. As far as I can tell it's a two-button game, though you can use the R shoulder button to make English-language speech bubbles appear over your character: "Hi" when you're walking around, "Help!" when you've been caught by a stream, and so on.

Speaking of languages, many of the menus and dialogue boxes are in English (or a version thereof), including this full-screen announcement at game's end: 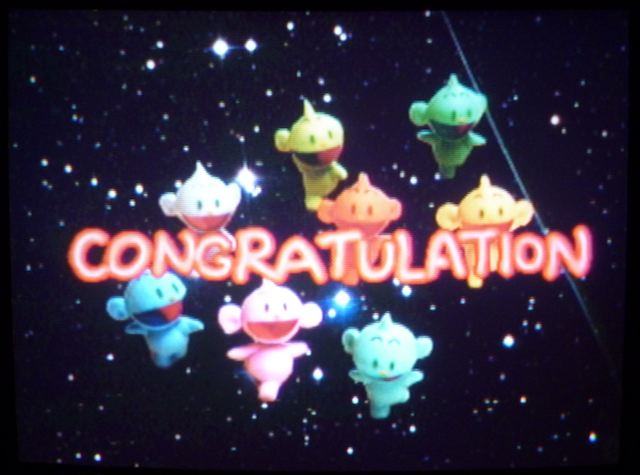 Since the game has practically no options, there's little to navigate, which makes it a cinch for non-Japanese speakers. There are some Japanese-language splash screens and instructional text, but the former don't seem crucial and the meaning of the latter is easy to guess at. The game is bracketed by CGI FMV cutscenes in Japanese, which are cutesy (or, uh, kawaii) but don't wear out their welcome.

HG101 makes it sound like the gameplay in Taiketsu Rumiizu! is completely random and inscrutable, but I had no trouble picking up the mechanics and understanding the game's flow (no pun intended). There's certainly a random element, and the game gets very chaotic at times, but it's not as if the whole thing is arbitrary -- it's easy enough to develop a sense for where the water will go.

Nor did I find the game hard, as 3DOKid did. During normal gameplay I was always able to pull out my 3 wins and never had to continue, though in one case I had to come back from a 2-0 deficit against one of the CPU characters. In fact, I beat the game on my first try, though the Level 4 boss fight was a little tricky and took me a few attempts. The CPU opponents are careful but aren't especially clever, and will frequently commit suicide, though there were some differences between characters: the human female opponent was pretty slippery and tenacious, while the drunken penguin...played like a drunken penguin.

That said, the gameplay mechanic may be novel, but it certainly isn't as addictive or elegant as Bomberman. I didn't try multiplayer mode, though I think it supports 4 players -- if it does, that's great! But 1P mode is pretty much a one-and-done experience, with little reason to play it again after beating it.

Still, Taiketsu Rumiizu! is neither a kusoge nor a classic, but simply a very playable game in a genre that's not strongly represented on the 3DO. Between that and the offbeat gameplay mechanic, it's worth a look.

Thanks for shedding some light on this one! I always like finding out about obscure releases, especially imports. This seems like one to seek out.
Top

Hey, thanks! I can't say it's a great game, but it's not without its charms. I'd be interested to see how it plays in multiplayer mode, and whether it supports 4P simultaneous.
Top

A belated reply, but this is an extremely well-written and informative review. Though I'd never heard of the game before, and your review has convinced me that it's not for me, I got a lot out of reading this. There's not a lot of info out there about Japanese-exclusive 3DO games, so it's good to know more about that little corner of the system.
Top

A belated reply to your reply, but thanks, Martin!