by blabla
Hi everyone !
Sorry for the lack of news , i'm still making 3DO games but at a much lower rate.
Like i promised , it's not a pony game and it's a "port" of Supra KillMinds for Megadrive. 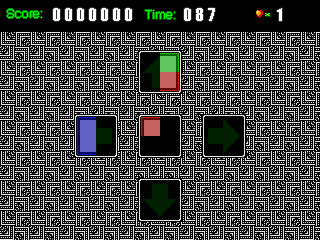 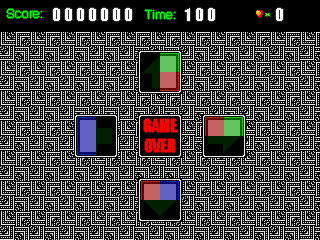 If you have played Assembloids on Atari 2600 or on C64 then it's almost the same game.
You need to fill all the empty squares and you have 2 seconds to move your 1/4 square.
Of course , you'll lose a live if you move a 1/4 square over another one.

Download :
Version 0.6
You can't go to the options yet and there's no sound but it's playable.

by 3DOKid
Great news mate. Just so you, these games you've made for us, get a tiny mention in the article i wrote for RetroGamer magazine here in the UK

by 3DO Experience
Alright! Another game!

3DOKid wrote:Great news mate. Just so you, these games you've made for us, get a tiny mention in the article i wrote for RetroGamer magazine here in the UK

Thank you 3DOkid for the mention !

Any suggestions are welcome !
Here's some ideas i've got in my mind :
- A battle mode , the last survivor wins. (Can be up to 8 players. And yes i checked , it's possible.)
- "Customisable" graphics. Instead of moving squares , i could move mario heads.
- A story mode ?
I'm already running out of (good) ideas...


3DO Experience wrote:Alright! Another game!

Yeah , i hope it will turn out better than my game Unlucky Pony...
I've got to admit that until now , i did all my 3DO games only for me.
My 3DO games were quite the kind of games you want to play on Browsers , not on 3DO.
(even though it might be cool to have the latest flash games on an old console)

by blabla
A demo is already available for those who want to try.
You can't go to the options yet and there's no sound but it's already playable.
Next version will have sound and the ability to choose from a selection of "skins".

EDIT : A new version is available : This one fixes a serious glitch and
improves the graphics a bit. (At least better than squares in 1 color , graphics from SupraKillminds)
Version 06

by T2KFreeker
Excellent. Looks like the 3DO world is getting a little trickle of game programming. This is awesome. Would be really nice to get finished with some really nice music. I agree that a Versus mode would be pretty cool, just not too sure it if would need to be 8 player. At this point though, a new game is a new game and considering that there hasn't been a ton of stuff for the 3DO in the last 15 years, this is very cool that you are doing something.
All times are UTC+01:00
Page 1 of 1
Powered by phpBB® Forum Software © phpBB Limited
https://www.phpbb.com/