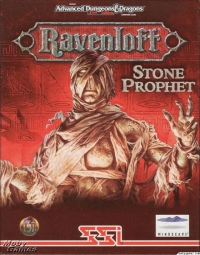 The Ravenloft campaign setting, despite the inordinate attention paid to signature vampire Strahd von Zarovich, was actually an amalgamation of many different settings, with horror as its only real bind. The sequel to Strahd's Possession wasn't a true sequel to that story. Instead, it took the player to the windswept desert of Har'Akir, where players could explore an Egyptian-style setting that isn't found all that often in RPGs. The novel setting worked pretty well, and the game's interface and combat were streamlined a bit from Strahd's Posession, making the game fun to play. The graphics were significantly enhanced as well, and you had a much more interesting selection of characters to adventure with that included an undead paladin and a were-jackal. Unfortunately, while the game was quite good in most respects, it fell down a bit thanks to a disappointing ending. Still, a commendable effort from SSI and DreamForge.

Do you know anything about this game?
3DOPlanet - Russian site about 3DO
Top

I dont believe that was a 3do game.
Top

BryWI wrote:I dont believe that was a 3do game.

Me neither. I've seen this before. i think this likely to be a typo. It's looks pretty sophsticated for a 3DO game!