by GuruMeditation
Anyone heard of this game before? I've just seen somewhere on the 'net offering it for download. Apparently it won't boot on FreeDO, as the arcade version of the 3DO used a custom BIOS. Very interesting...

It only works on the fz1 arcade console.It has a different bios inside!
Its a prototype game and i own the whole kit!!
by GuruMeditation
Cool! I guess you know where I saw that link then.

Any chance of dumping the BIOS from the machine? Pics of the machine would be awesome, mate!

by pitsunami
Its a fz-1 with some custom pcbs! 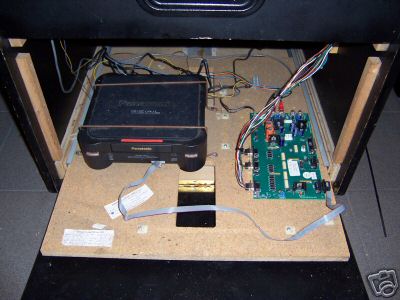 A friend told me that it runs on freedo 1.7 that supports arcade games!

by CasetheCorvetteman
Where can that be downloaded from?
by CasetheCorvetteman
Hmmm, i was under the impression this was to be a live action shooting game? It wont run on my FZ-10, although it did seem to do something more than nothing, cause it tried to start it 3 times.

It did run fine on FreeDO
by pitsunami

CasetheCorvetteman wrote:Hmmm, i was under the impression this was to be a live action shooting game? It wont run on my FZ-10, although it did seem to do something more than nothing, cause it tried to start it 3 times.

It did run fine on FreeDO

If you read my previous post...it doesnt run on normal 3dos!
by GuruMeditation

CasetheCorvetteman wrote:Hmmm, i was under the impression this was to be a live action shooting game? It wont run on my FZ-10, although it did seem to do something more than nothing, cause it tried to start it 3 times.

It did run fine on FreeDO

It wouldn't run on FreeDO for me, using both the normal and patched FZ-10 BIOS. How did you get it to run?
by pitsunami

Zombie13 wrote: It wouldn't run on FreeDO for me, using both the normal and patched FZ-10 BIOS. How did you get it to run?

It runs on 1.7 version i think.
by GuruMeditation

Zombie13 wrote: It wouldn't run on FreeDO for me, using both the normal and patched FZ-10 BIOS. How did you get it to run?

Ah cool, never thought to try anything but v1.9.

by CasetheCorvetteman
Pitsunami, i DID read your post mate yes, and i wasnt expecting you to be incorrect either, however i did think it was worth a try to see what it actually did do, and it did try to load 3 times before it went to the insert CD screen.

I cant seem to find the video i watched on YouTube of what i thought was meant to be the intro to this said game, but it wasnt at the start of the copy i got. Are there different versions of this game?
by pitsunami
Maybe i will try sometime to set up the whole kit and capture some videos...need to find some time though.
by CasetheCorvetteman
That would be good to see mate yeah, i remember playing mad dog 2 in an arcade here in Australia about 12 years ago on a reasonably old machine (it ate my money for zero credit) and i didnt get a good look inside the machine when the guy opened the door, but it did look alot like an FZ-1 in there, and the video wasnt any different to the way it is on the 3DO at home, i didnt know they ever had Mad Dog 2 on a 3DO in the arcades though, so i couldve been mistaken.
by mattyg

Most of the later American Laser Game Titles were released in Arcade versions using FZ1s inside - The earlier ones used specific architecture based on the Philips CD-i (I think)
by CasetheCorvetteman
Yeah mate, im in QLD. I wouldnt think we would be real common on a small forum like this, especially since the 3DO wasnt real easy to get here compared to other consoles of the day.
by mattyg
Yeah there's been a few of us here - Puggsy , Nocturne & Tinman are all Aussies too!
Back in the day I lived in a small country town (pop 20,000) and found through word of mouth 2 other owners!!
I also wandered into a pizza parlour in Canberra circa 1995 and they had glass cabinets around the restaurant with 3do games and hardware for sale! What the?
Turns out the Pizzeria's owners were mad keen gamers and wanted to share the love.
I promptly bought Wing III , Killing Time and a game gun from them along with a supreme, cappucino & garlic bread!
by 3DO Experience
Matty, the fact that you remember the food that you got along with your games is astounding. You are a true gamer.


PS. That's an awesome pizza place too!
by mattyg
The second attempt we made to visit there ( I lived 5 hours drive away in the middle of nowhere) we 'borrowed' an unsuspecting flatmates car put a rock through the radiator , blew the engine , and nearly $1000 later made it back home. I never got to go there again , don't know what happened to the place and couldn't spend any money on games for quite some time

but for one fleeting moment in time I experienced gaming nirvana!

now all I need is a de Lorean , some lightning and hit 80mph so I can go back!
by CasetheCorvetteman
Well Matty G, a friend of mine has an 81 DeLorean, although its still a lefty and not registered, as well as being it pieces to have some major work done (they aint much of a car for the money!!)

I will be flying into Canberra on the 15th, then ill be driving back to QLD that weekend sometime.

I dont spose youd care to part with that game gun would ya?

by mattyg
here's the thing - I had no idea the guns were difficult to get , I bought one readily at the time and chucked it in when I sold my 3do in '96. When I got back into it 18 months ago and bought one off evilbay the guy threw one in as part of the deal along with 49 games. so I had no idea of their worth - I'm actually looking for the two player version to go with it so I can play Last Bounty Hunter in 2 player mode!

I doubt if the shop is still there ( I'm in Newcastle now) its been 13 years but it was a Pizzeria in East Row , Civic.

Happy gun hunting!
by CasetheCorvetteman
Ive never seen a 2 player version yet either. Ive got all those ALG games on the 3DO, me and my mrs have been playing them recently with the pads. We actually have gotten pretty good, one good thing is when you get good on one of them, its pretty easy to get good on another one!!

Would indeed be great to have 2 guns, i have 2 CRT projectors here that ill be setting up in my new house when i get it built, would be good playing gun games on a 120 inch screen

I have a 125" screen, would that make you happy? Actually I've never hooked up my 3DO to it. I'm afraid to see what it would look like on an HD that big, I'm not even sure if the gun will work on a front projector, has anyone here tried it?
by 3DOKid
Hello. Can I please have a picture of your 125" TV because I live in cave and do not believe such a thing exists.

(125" you are kidding me right?)
by 3DO Experience
Actually I'm not kidding you. It's not a TV set, it's a projector. I would have it even larger but the biggest retractable screen was 125". I only have one wall in my living room that a larger screen could go but I would have to take things out and have the screen up all the time.

I saved up for the projector and screen in 2007 and got the projector about this time last year after I received my x-mas bonus. I have only hooked up the Wii and Saturn to it. Wii looked ok, Saturn looked like caca. If you want picture I could get my friend to take one, she has a nice digital cam and I can put up a Blu-ray movie I just got. (got the Panasonic DMP-BD55k two days ago) I'll put the case in the shot for reference. It's about 5 feet high by 9 feet wide. I know it sounds like a tall tale, HA! I kill me!

Funny note: my best friend got me 3 Blu-ray movies for x-mas but she knew I didn't have a player yet.
by CasetheCorvetteman

3DO Experience wrote:I have a 125" screen, would that make you happy? Actually I've never hooked up my 3DO to it. I'm afraid to see what it would look like on an HD that big, I'm not even sure if the gun will work on a front projector, has anyone here tried it?

Depends what sort of projector it is, if its CRT, is should work, if its LCD or DLP, it wont work.

3DOKid wrote:Hello. Can I please have a picture of your 125" TV because I live in cave and do not believe such a thing exists.

Yes Barney Rubble, as a matter of fact, i can do that for you.

These pics are around 2 or 3 years old now.
This is a picture of the 108" screen without the flash:

This is about the same picture but with the flash:

This is a picture of me standing with the 120" screen for a size reference, taken with the flash.

Here is the projector for the 120"

And here is the other one:

So no, at 125", we aint kidding you, and not only do they exsist, they have done for more than 20 years.
by Puggsy
Reading Mattyg's post about the pizza shop reminded me of a similar story.

When I was in my late teens/early 20's (back in the 90's) the bloke who ran the local video shop was a bit of a gaming nut and had Neo Geo and 3DO games and consoles for rent! Absolutely unheard of in Oz where both those systems were incredibly hard to come by! Generally most video shops only hired out Megadrives or Super Nintendos.

It was great because I bought an FZ-10 3DO and got to play heaps of games without having to shell out mega $$$ importing them from the other side of the world.

If only he sold pizza too it would have been perfect

by 3DO Experience
Wow, that rental place would have loved me, I'd be in there all the time. Sorry about the wait on a pic, hopefully sometime this weekend. And now that I re-read mattyg's I want pizza.
by mattyg
I just had some!
by trez420
Crazy!!! i live like 10 minutes from old tucson........ i gotta play this game!!!! so theres no way this will play on a 3DO console?? do i have to use an emulator.... i hate playing games on my comp.. how would i even play a light gun game on a comp?? any help? thanks!!
All times are UTC+01:00
Page 1 of 2
Powered by phpBB® Forum Software © phpBB Limited
https://www.phpbb.com/